FREE WORLDWIDE SHIPPING ON ALL ORDERS

The Ultimate Thin Case from Ultimate Shield is the best super thin case for your Xiaomi Mi 11 Ultra. It is designed to protect your phone while keeping its original sleek look. The Ultimate Thin case is designed with extreme precision having perfect cutouts keeping all ports and buttons totally accessible. A subtle lip adds extra protection to the protruding camera lens. Beauty lies in simplicity. No unnecessary bulk, no branding whatsoever was added to the case. At just 0.35mm thin, it will remain almost unnoticeable. Allow the original phone colour and logo to lightly show through with the beautiful semi-transparent matte finish. Very disappointed. This can hardly be called a case for how thin it is, probably more of a skin for your phone. I purchased it as it was the only case that I could find for the Xiaomi Mi 11 Ultra that actually covered the camera bump, looked decent and had the hole cut out for the noise cancelling mic on the camera bump. However upon receiving it, I was highly disappointment to realise just how thin it actually was and that it wouldn't protect the phone from any kind of fall. It's also very slippery and has no grip whatsoever. No way am I risking my phone in this "case". It's gone back into the box never to be used again. The only reason I gave it 2 stars instead of 1 is because it is very thin and it technically is a case, so it is as described but I was just expecting so much more. Shame.

I really love this case. The matte transparent look lets the design of the phone shine through while providing a decent protection. Also, I love that the case is very thin so it barley adds anything to the phone. Last but not least it also feels great with a matte but still grippy surface. Highly recommended case! 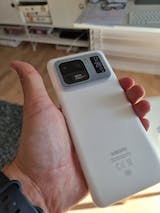 #UltimateShielded
Protect it. Love it. Capture it. Share it.